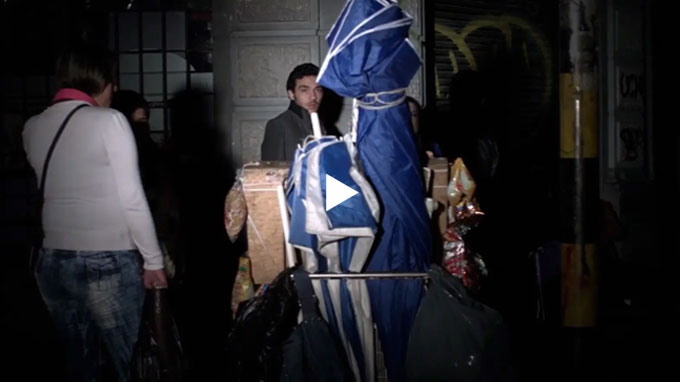 Calle 22 is a video work documenting the varied nocturnal life along the southern side of the infamous street ‘Calle 22’ in Bogotá. With a high-speed camera and a spotlight Julius von Bismarck shot over 2500 frames per second to capture the road’s landscape at night in a single uninterrupted shot. Condensed in a 40 minutes slow motion film as a nearly frozen scenery, leading from the prosperous parts of the city to its poorer quarters, Calle 22 exposes Bogotá’s urban development within a limited space and time.

Documenting the city’s socio-political background through the isolated perception of solely one road, von Bismarck questions the outside gaze on the social strata of a foreign country. The spontaneous and unbiased quality of the used film technique as continuous shot, stands in stark contrast to Western photography in poorer countries, which ofttimes lures to trigger a certain emotion or reaction of the viewer through selected image frames and motifs. The spotlight produces an aggressive interference in the private life of the local people as it is often the case with Western reports of other cultures. Despite the high speed at which the street was filmed, the conical light beam allows individual scenes to appear focused while simultaneously portraying the people of Bogotá as if by accident.